A couple of years ago, dating site OKCupid caught the internet’s fractured attention with an article about their users’ self-reported heights. Turns out, when you ask someone to say how tall they are on their profile, they’re probably going to lie about it. And when we say “probably”, we truly mean it. The phenomenon was nearly universal. Men, women…everybody lies and says they’re taller.

To ferret out truth from fact, our fellow nerds at OKCupid compared self-reported heights to national averages. Which got us thinking: We’ve got some interesting self-reported data of our own — the weight users record on their initial risk assessments. (Here, we’re talking about a one-minute health quiz that people fill out on their own. We gather basic health information to help us assess whether or not someone is at risk for developing certain chronic diseases.)

In our case, unlike OKCupid, we’ve actually got enough follow up data from participants’ first weigh-ins to make the comparison without needing to rely on national averages. (Weigh-ins happen on a digital, wireless scale that’s provided as part of the program. Which means we know a participant’s true, exact weight just moments after they do. Pow! Technology!)

So what do you suppose most folks say when asked to report their weight?

If, like us, you guessed that participants would say they weigh less than they really do …you’re wrong.

Turns out, most folks slightly over-estimated their weight on their risk assessment, as you can see here: 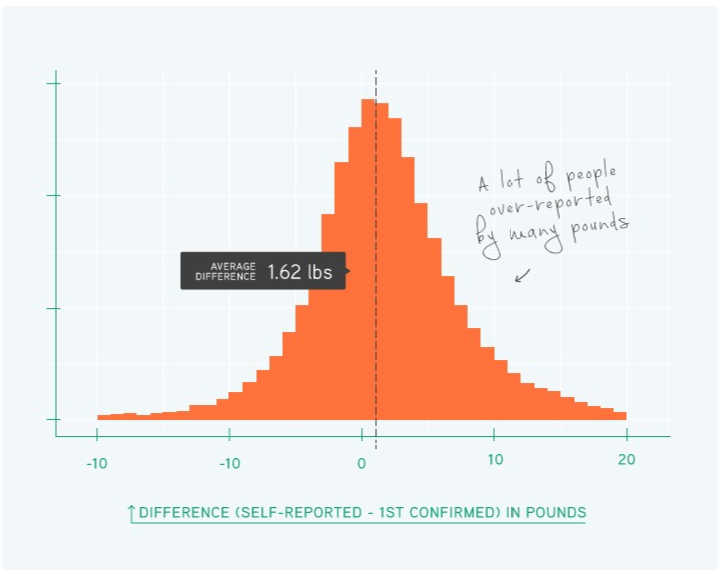 We threw around a handful of possibilities, all of which make us feel pretty darn good about the intentions of our untruthful participants.

Possibility number 1: There’s usually a short time lag (maybe a week or two) between a participant’s assessment and their group’s kickoff. Maybe people are accurately reporting their weight on their assessment, then losing a few pounds before the program gets underway.

Possibility number 2: Our participants genuinely have no idea what they weigh, but instead of actually weighing themselves to find out for sure, they’ve taken a rough, slightly inflated guess. (Related: the home scale they’re using is old and unreliable).

Possibility number 3: Our participants are knowingly telling us they weigh more than they actually do.

As data scientists, this third possibility intrigues us most because it begs a fascinating follow-up question: Who on earth would do that and why?

Well, let’s think back to our OKCupid example for a moment. If an OKCupid user lies about their height, they’re probably doing it because they believe it will lead to a more positive outcome from their dating experience. Following that logic, Prevent® participants may be overestimating their weight because they think inflating their current weight will guarantee them a spot in the program. Now, I’ll give them “A for effort”, but since we confirm starting weights by sending each participant a wireless scale, it’s not a particularly lasting deceit. Not to mention the fact that weight is just one of many factors that puts someone at high risk for type 2 diabetes or heart disease.

Or maybe they’re overestimating so they can feel less bad when they finally get the real numbers. ” Look at that! I weigh less than I thought I did!”

But then again, who knows? There could be a possibility number 4 (or 5, or 6). We certainly welcome any other explanations that occur to you as you read this. Leave us a comment or highlight a line with your best theory.

Before we wrap up, we’d like to share a couple more interesting tidbits that came out of the numbers:

First, men are 6 times more likely to overestimate their weight than women. We’ll leave the interpretation up to you on this one.

Second, even after controlling for men’s tendency to exaggerate, there’s a small but still significant correlation between how much someone overestimates their weight at risk assessment and how much weight they lose after 16 weeks in Prevent. In other words, the worse you are at guessing your own current weight, the better you are at losing it. Go figure.

So keep on lying, America. At least at the start, anyway. After that, it’s not worth the effort. Our health coaches are trained to keep you honest. :)

Investing in Security to Build Trust in Digital Health

What Digital Health Learned From Netflix: How Data Science Is Creating Self-Learning Healthcare