The Tipping Point Population: From Crisis to Opportunity

Our story begins with a good news/bad news situation.

Let’s get the bad news out of the way first. There’s a health crisis brewing in your organization. It’s growing steadily, while you’re busy with other things, and it’s poised to create a significant, negative financial impact on your company.

Now, on to the good news: The crisis we’re referring to is largely avoidable, and this white paper will tell you how to do just that. (So really, the good news outweighs the bad by quite a bit.)

What crisis are we talking about here? Imagine a scenario where a significant portion of your employee population is at risk for developing a costly chronic disease while your attention is focused elsewhere.

On one end of the spectrum, you’ve got the wellness population. These folks are healthy, by and large, and will tend to remain that way through the years, regardless of what you do (or don’t do). So investments in “wellness” programs don’t often return a meaningful ROI. (More on that later.)

On the other end of the spectrum, you have the chronic disease population. These folks are typically suffering from chronic diseases like type 2 diabetes and heart disease which require costly, ongoing interventions like branded drugs, medical devices, frequent doctor visits, and occasional ER & hospital visits. As you might imagine, companies spend huge amounts of money on these folks. But there’s a limited amount any of us can do to reduce the cost of chronic disease management: By definition, it’s a lifelong affair.

This is where the story gets interesting. Right here in the middle, we’ve got a group of employees we call the Tipping Point Population.

These people are in real peril of tipping into chronic disease if they don’t address the unhealthy behaviors that are putting them at risk.

But — and this is a very important but — they’re not sick yet.* This crucial fact marks an incredible opportunity to impact lives and save money.

(*To be fair, they’re not exactly healthy, either. A person with prediabetes, for instance, may already have microvascular damage, which tends to be asymptomatic. But for the sake of argument, let’s say that any early consequences of a looming condition are likely going unnoticed, though they aren’t without impact, including increased healthcare spending.)

Addressing the needs of your Tipping Point Population might just be the most important thing you do this year.

You have the opportunity to create real, meaningful change in your organization by providing those at risk with the tools to pull themselves back from the brink of chronic disease — where again, your ability to affect outcomes and cost is low. But it’s going to take something far more deliberate than your typical “wellness” program to do it, because the Tipping Point Population has a very different set of needs than your wellness population.

Let’s back up a minute to understand why that’s true.

First, how many people are in the Tipping Point Population at an average company? Based on data collected from the National Health and Nutrition Examination Survey, nearly two-thirds of overweight/obese individuals already have a precursor condition (say, prediabetes, dyslipidemia, or hypertension — sometimes all three at once) that can lead to chronic diseases like type 2 diabetes and heart disease.

To make matters worse, far too many people with these precursors are completely in the dark about their status. A staggering 90% of people with prediabetes don’t know they have it.

That’s one reason why in the U.S. and around the world, you’re now more likely to die of a (largely) preventable disease than an infectious one. 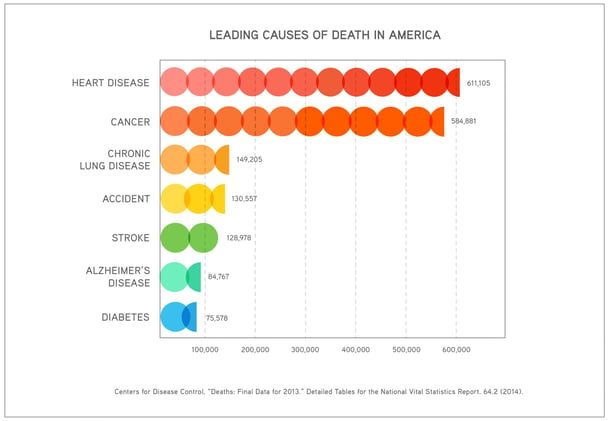 But let’s break that down further.

Two particular chronic diseases on the above list, heart disease and type 2 diabetes, carry the dual distinction of being amongst the deadliest and the costliest.

In fact, taken together, heart disease and type 2 diabetes will be most organizations’ biggest driver of healthcare costs next year — and for the next ten years.

That’s because without intervention, each year — and every year — between 5 and 10% of those in the Tipping Point Population “tip over” into the chronic disease population.

Put simply, a company with 5,000 employees can expect over 1,000 new cases of heart disease and type 2 diabetes within the next five years. Depending on the degree of complications, the medical costs alone will reach $14,000 — $21,000 for each case, every year, moving forward.

That’s just the obvious costs. Chronic disease tends to be expensive in a lot of not-so-apparent ways, too. For instance, the average person with type 2 diabetes works 3 weeks less per year than their healthier counterparts.

Of course, it’s not simply about economic costs. Living with type 2 diabetes or heart disease can put a huge psychological and emotional burden on those with the condition as well as those who care for them.

Here are a just few examples of things someone suffering from heart disease or type 2 diabetes might deal with regularly: 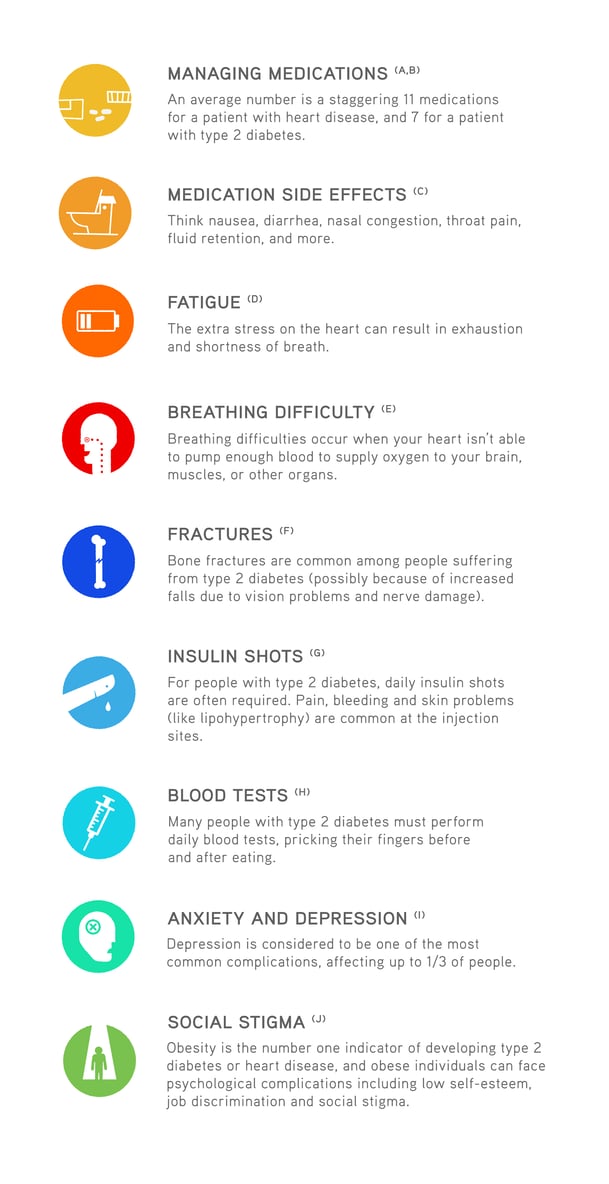 But enough with the scary stuff.

Good news: Employers have the power to change the Tipping Point’s trajectory.

About ten years ago, the Centers for Disease Control and Prevention (CDC) and the National Institutes of Health (NIH) teamed up to see if type 2 diabetes could be prevented in those with prediabetes. Turns out the answer is a resounding yes — if people engaged in a high-quality, intensive behavioral counseling program that inspired them to adopt better habits long-term (even in the face of life’s challenges), and lose a modest amount of weight. In fact, the intensive behavioral counseling program tested in the project had a significantly greater impact than medication (in this case, metformin).(1)

Over the course of three years, people in the Tipping Point Population reduced their risk of developing type 2 diabetes by 58%. 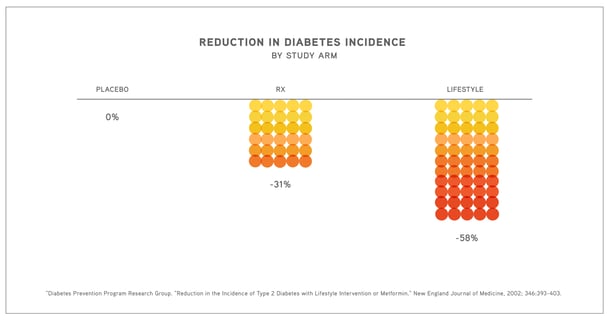 In fact, the approach proved so effective that health plans are now required to provide similar intensive behavioral counseling programs to adults at risk for heart disease and type 2 diabetes. (If you’re not sure if your health plan is doing so to the degree they should, it’s worth asking).

So, why is the Tipping Point population still such a big problem?

Unfortunately, the promise of the clinical trial results was tempered by one critical limitation: The inability of Intensive behavioral counseling to scale to the size of the problem.

That’s because, traditionally, intensive behavioral counseling interventions have been delivered in person, either one-on-one or with a group meeting at a fixed time and location each week (say, over the course of a few months) for weigh-ins, health coach interaction, group support, and on-going lessons on healthy behavior.

Most people don’t have that kind of time — or access. Chronic diseases like type 2 diabetes and heart disease tend to strike in mid-life. The 40 and over crowd. That’s also the time of life when we tend to be most time-starved, often juggling careers, children, and aging parents. The ability to carve out time on a regular basis for in-person meetings simply isn’t realistic. And this assumes you live close enough to make weekly visits to a doctor or therapist in the first place. Not to mention the fact that, in the US, there are simply too many of us in the Tipping Point Population. The in-person approach simply does not scale to the size of the crisis.

Omada Health has a simple — but bold — mission: “Inspire and enable people everywhere to live free of chronic disease”.

We designed a digital intensive behavioral counseling intervention to help the Tipping Point Population tackle type 2 diabetes and heart disease — no matter where they live.

Our breakthrough online program, called Prevent®, inspires healthy habits you can live with long-term. It combines the science of behavior change with unwavering personal support, so you can make changes that actually stick. And it doesn’t matter whether you live in Alaska or Florida (or anywhere in between). You can engage with the program anytime, anywhere.

It includes a full-time health coach to keep you on track, wireless smart scale to monitor your progress, mobile app to automatically track activity and food, interactive program that adapts to you, weekly interactive lessons to educate and inspire, and a small group of peers for real-time support at every step. (Curious to see it in action? Watch this short video).

It’s an approach shown to reduce risk factors for type 2 diabetes and heart disease. What’s more, the average participant loses over 10 pounds along the way.

That’s why intensive behavioral counseling is so critical–the hard part isn’t short-term weight loss. It’s long-term maintenance, which is precisely why we focus on inspiring better health habits that last. Most traditional wellness and weight loss programs skip this part, and the weight invariably comes back on. In fact, a 2013 RAND study found that after 12 months, participants in the average workplace weight loss program kept off less than 1% of their body weight. No wonder the CDC, the US Preventive Services Task Force (USPSTF), and the American Diabetes Association (ADA) all support Intensive Behavioral Counseling (and not “wellness programs”) as standard of care for patients in the Tipping Point population.

Given the high (and rising) cost of obesity-related chronic disease, it’s no surprise that changing the Tipping Point’s trajectory towards a healthier lifestyle translates to huge spend reduction.

By implementing a digital intensive behavioral counseling, companies may see a fast and significant reduction in new cases of type 2 diabetes and cardiovascular disease. For example, a company with 5,000 employees that implements Prevent may develop up to 70 fewer cases of chronic disease over a five year period. 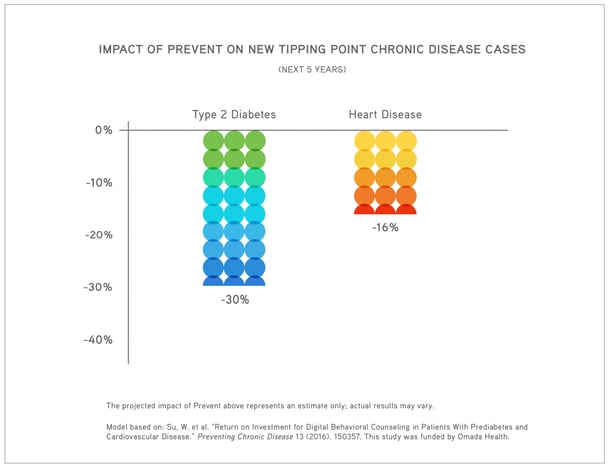 Steering even a portion of these Tipping Point employees away from a lifetime of chronic disease can reduce costs — even in the near-term. A company with 5,000 employees can expect to reduce healthcare spend by roughly $1.3 million within 5 years assuming just 25% of their at-risk employees go through a digital intensive behavioral counseling program: 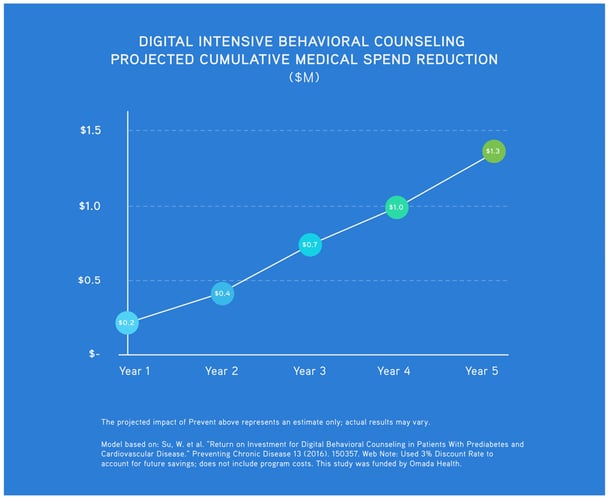 So we’re back to that good news/bad news conversation.

Put simply, the bad news is that doing nothing is incredibly expensive. Inaction brings both an overwhelming financial burden and human toll.

But the good news is that there’s an approach that keeps your investment targeted, lean, and outcomes-based. And gives your employees a reason to feel supported and understood — not to mention a whole lot healthier.

Consider the incredible outcomes enjoyed by Costco, who began offering Prevent to their Tipping Point employees in 2015.

Or when Humana offered it to their at-risk Medicare Advantage health plan members.

In both cases, we see people inspired to make lasting changes. And folks who were overwhelmingly grateful to their employers and health plans for the opportunity to do so. We’d call that great news, by any standards.

1. In the NIH’s DPP Clinical Trial, the intervention tested in the “Intensive Lifestyle Intervention Group” aligned with the characteristics of an Intensive Behavioral Counseling program, as defined by USPSTF in its 2014 guidance.

Is an ounce of prevention worth $54M? Ask Iron Mountain.

Omada is helping people shift their mindset to improve their health. Keep up with Omada: