My wife only weighs herself in the morning. She insists that’s when she weighs the least. She says things like this with full confidence and authority. So it’s tempting to take her at her word on it (admittedly, she’s building a track record on being right about this sort of thing). But as someone who works with weight data day in and day out, and a skeptic at heart, I needed a little more proof.


Since I have access to one of the world’s largest datasets of weight readings, getting to the bottom of this wouldn’t be hard. All I’d have to do is look at the Omada weigh-in data to see if her hypothesis held held any water. But first, I wanted to understand the physiological reasons for if/how this might even be possible. So I set off on a mission to find out:


What happens to dinner while we sleep?


The first thing I did was ping the question off a few of my friends. But they turned out to be even less clear on this than I was.


“It’s converted into energy, right? To be used for exercise and work.”


“It’s turned into muscle or fat, depending on, like, the carbs in it and stuff.”


“Maybe we burn off those calories just by sleeping?”


Hm. There seemed to be a common thread of misconception here, revolving loosely around the concept of losing weight via “burning calories” or converting the food mass to usable energy. But if weight-loss was the product of mass (food or fat) being converted directly into energy, we’d be in trouble. Think: E=MC2, atomic bomb, mushroom cloud kind of stuff...happening in your body.


According to some quick calculations that I won’t bore you with here, converting 1 pound of body mass would create around 40,000,000,000,000,000 joules of energy. That’s roughly enough energy to power New York City for 3 years. Or about the energy released by the largest nuclear weapon ever detonated.


Good luck trying to sleep through that!


My friends having failed me, I turned to my most trusted oracle: Google. A few minutes of research quickly solved the disappearing dinner mystery. Ready for this? We breathe most of it out.


As messy as that sounds, it’s true. I dug deeper, and here’s the science:


The fat from our food gets stored in our bodies as a compound called triglyceride. What’s triglyceride, you ask? It consists of just three atoms: carbon, hydrogen and oxygen. When it’s broken down, about 20% of it forms water (H2O) and 80% of it becomes carbon dioxide (CO2). With every breath we exhale, both water and carbon dioxide escape.


Is it possible that a single night of sleepy gas exchange can really make a measurable difference? Indeed, more googling suggests we release somewhere around 20 mg of water and 36 mg of carbon dioxide per exhalation. And the average healthy adult, at rest, takes 12-20 breaths per minute. Some back of the envelope calculations reveal that we breathe out about a pound of the stuff formerly known as dinner (and lunch, and breakfast, and snacks) while we sleep! Sweaty sleepers: you’re losing even more weight.


Of course, data being data, we don’t have to stop at a few napkin calculations, we can look for ourselves. 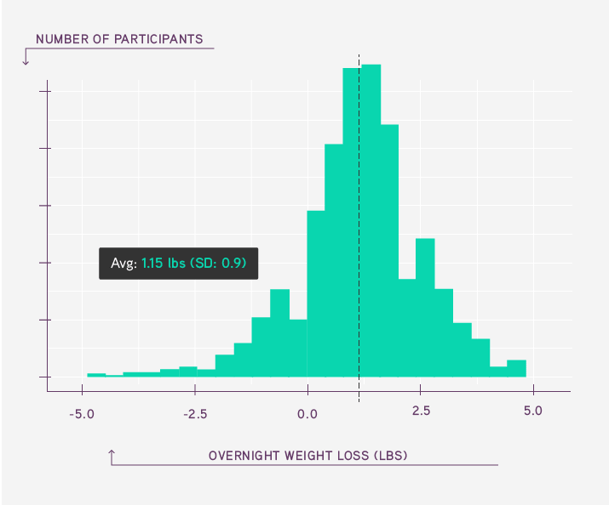 Now, not all Omada participants choose to weigh themselves right before bed AND upon waking up the next morning. But among those who do, this histogram shows the differences in individuals’ weights between evening weigh-­ins (after 10 p.m.) and consecutive morning weigh­-ins (before 7 a.m.).


Sure enough, ­we observe Omada participants waking up approximately 1.2 lbs lighter than when they went to sleep. Based on what we learned above, it’s safe to guess that about a pound of that would be due to breathing, and another few ounces could be attributed to sweating.


Score another one for my wife. 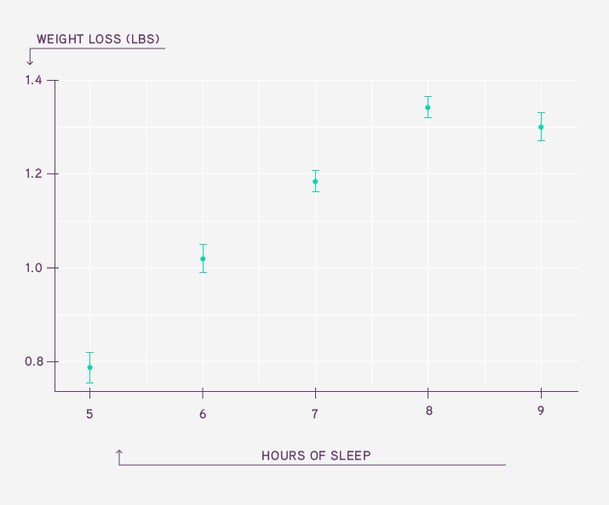 Looking at that same subset of evening+morning weigh-in enthusiasts, we also observe that the overnight weight-loss increases throughout the night until it appears to reverse around 9 a.m. Perhaps, by this point, participants are bringing their re-hydrated bodies, and even breakfast, with them to the scales.


All this sciencing may beg the question: can we breathe ourselves to skinny? But a weight-loss program based on breathing alone is, unfortunately, doomed to lead to hyperventilation well before any measurable drop in weight. Sustainable weight-loss takes lifestyle change, support and commitment.


Regardless, breathing does come in handy for most all of life’s endeavors. So all of us at Omada highly recommend you keep doing it.


Have any other hypotheses you’d like Omada’s data scientists to test out? Leave a message for us on Twitter. We have a ton of data and we live to plot.