It’s been a busy few weeks for the Omada Government & Medical Policy Team – and there’s more on the horizon. Here’s a recap of what’s been going on, and what’s coming up, when it comes to Omada’s work in our nation’s capital. 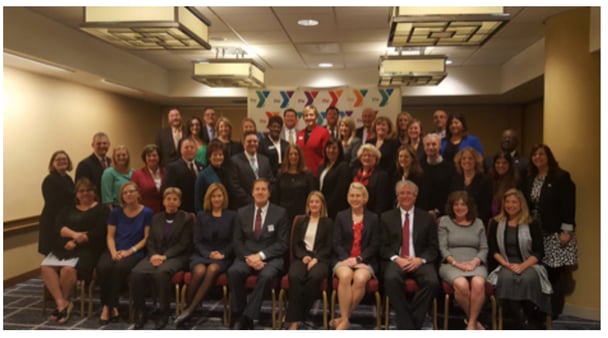 For the past three years, the Innovation Center and the YMCA have partnered to deliver the Diabetes Prevention Program (DPP) to Medicare-enrolled seniors at 17 sites across eight states. To date, the Y has delivered the DPP to nearly 8,000 Medicare enrollees, helping Medicare enrollees with prediabetes reduce their risk for progressing to type 2 diabetes. “Organizations like the YMCA are on the front lines of our communities,” said Secretary Burwell. “[Their] engagement is going to help us begin to understand the best way to prevent chronic disease, and help people live better lives.” While the final results of the YMCA’s demonstration project are still being reviewed by CMS actuaries, the demonstration was predicted to save Medicare $4.3 million in the first three years, and $53 million over six years.

Importantly, CMS is also evaluating the clinical benefits of seniors’ engagement with digital behavioral counseling programs like Prevent. At Omada Health, we’ve been interacting with CMS to support the agency’s diligence on evaluating these programs. To date, Omada has served more than 2,000 participants over the age of 65. Our results show that seniors enrolled in our program have been easily able to integrate the technology into their daily lives. Six months after starting the program, 84% of participants (with an average age of 69) remained engaged. Even more impressively, those participants lost 7.8% of their weight, reducing projected three-year risk of developing type 2 diabetes by as much as 70%.

Later the same day, we joined a diverse array of healthcare stakeholders on Capitol Hill for a briefing hosted by Senators Al Franken and Chuck Grassley, as well as Representative Susan Davis. All three are lead sponsors of the Medicare Diabetes Prevention Act, bipartisan legislation that would extend the DPP as a covered, preventive benefit for Medicare enrollees. Our team and our partners at the Diabetes Advocacy Alliance have been strong proponents of that bill. In February, Omada submitted official comments to the Senate’s Chronic Care Working Group, urging the group to include diabetes prevention in any comprehensive chronic care legislation. As we wrote in our letter, “the best way to treat chronic disease is to prevent it in the first place.”

At the briefing, Senator Franken recounted the frightening statistics facing Medicare. More than half of all seniors – an estimated 22 million – have prediabetes. According to CMS, Medicare spends more every year treating beneficiaries with chronic conditions, including $15,700 annually for the average enrollee with type 2 diabetes. Sen. Franken argued that extending a preventive benefit was the right thing to do – for American seniors, and for Medicare’s bottom line. We agree.

Later in the week at the American College of Preventive Medicine’s annual Preventive Medicine Conference, Mike Payne and the YMCA’s Chief Health Officer Dr. Matt Longjohn spoke with Politico about the prospects for Medicare reimbursement for diabetes prevention. That evening, both joined a panel on making clinic-to-community connections to prevent diabetes. Along with Dr. Anne Albright from the CDC, Dr. Karen Kmetik from the American Medical Association, and Dr. Elizabeth Kraft from Anthem Blue Cross Colorado and Nevada, the group discussed innovative approaches to aligning incentives between providers, payers, and at-risk patients for diabetes prevention. Mike Payne concluded his presentation by placing Omada squarely within this ecosystem. “We’re not a technology company,” he said. “We’re a health care provider that uses technology to deliver highly engaging, effective behavioral counseling at the scale necessary to combat America’s prediabetes epidemic.”

The following week, we hosted a reception with the Diabetes Advocacy Alliance to honor the commitment of Congressman Ed Whitfield, outgoing chair of the Congressional Diabetes Caucus. At that event, we also welcomed the new chairs of the Caucus, Representative Tom Reed of New York, and Representative Diana Degette of Colorado. That good-looking fellow in the bowtie is Omada’s Director of Government Affairs Christopher McGowen. “Congressman Whitfield has been a tireless advocate for diabetes – and diabetes prevention – in Congress,” said Chris. “Representatives Reed and Degette are ready to carry on that legacy, and it’s already been great working with them.”

Omada’s Director of Government Affairs Chris McGowen with the new Chairs of the Congressional Diabetes Caucus.

This week, our team will be at the National Health Policy Conference hosted by America’s Health Insurance Plans (AHIP), discussing the future of diabetes prevention with industry leaders, and working to shape the policy conversation around chronic disease prevention.

We expect chronic disease prevention to be a hot topic in Washington this month – and throughout the rest of the year. Our team will continue to deliver updates as we ensure those making decisions know that investing in prevention delivers long-term value when it comes to type 2 diabetes, and that digital tools like Prevent can deliver clinically-meaningful results to any patient population.

At the end of the month, Omada CEO Sean Duffy will deliver the opening keynote at the the Society for Behavioral Medicine’s Annual Conference - a true testament to Omada’s status as a next-generation digital behavioral medicine company that acts as a digital health partner, not a technology vendor, for our clients.

Sean’s talk, “Behavioral Medicine Goes Digital: Advancing and Scaling Effective Interventions through Technology Design” will delve into how technology is changing the way we deliver behavioral medicine – and how it enables companies like Omada to make those interventions even more effective through the use of advanced data science and experimental techniques.

In the meantime, stay tuned for future updates

Investing in Security to Build Trust in Digital Health

What Digital Health Learned From Netflix: How Data Science Is Creating Self-Learning Healthcare